The Stone Books
by The Last Recorder of the Druids,
John Hugh Roberts &
Dale Bertrand

In 1978 I came into a collection of writings on yellowed brittle parchment paper – over 140 manuscript pages. Many of these papers had mysterious number columns, strange heiroglyphics, and unusual letters and calculations. There were all written with a beautiful elegant penmanship. With these individual pages came 5 diaries covering approx 50 years of this man’s life travels across Wales, Canada and the USA, all of these travels taking place between 1844 and 1912. These papers came to me in a unusual sequence of events that Dr. David Davies from Abergavenny Wales wrote me later, “it was typical of a planned campaign to get these writing into my hands.“These papers turned out to be written by a John Hugh Roberts, a man who professed to be the “Last Recorder of the Druids.” John Hugh arrived in Vancouver BC with his family in the 1882 era. He eventually passed on in 1917 at Point Grey, Vancouver. His papers and writings remained in boxes in an attic at his grandsons house until he passed on in 1978, when they eventually came to my mother, Mary Bertrand who was his good friend.

Over the years many sycronistical events have taken place. One of these took place seven years after my first receipt of the manuscripts. We were at a loss on the meaning of much of the writing as it was very detailed. Then our close friends TW & JW visited Saltspring Island and were asked by another very closed friend DA to take this ‘book’ back to Dale as he had found it at the local recycling store at the dump at Ganges and when he opened it he immediately recognized Roberts handwriting. On examining the book we found that it provided the key to finally understanding these papers and their destiny.

Researching these document have taken me on travels to Wales, England, Ireland, Peru, Gautemala and Mexico. My wife and I spent some time living in Mexico and England reseaching the papers. While living in Birmingham we were able to take many trips to Wales and Cornwall to further our understanding of John Hugh Roberts.

The research has presently being developed into 6 books -One the Druidical Quest , another four are books of Illuminated stories from the manuscripts beautifully done by Leo Del Pasqua.

Our last publication was a book of the original vision of John Hugh Roberts which it took him 9 years to write called “the Stone Book of Knowledge”.

In November of 2004 we filmed 8 hours of material in Wales, Cornwall, and Ireland visitng the Sacred Sites which could be used at a later date if any documentary of John Hugh Roberts life is made.Presently we have had three articles published in the Celtic Connection newspaper. One in June of 2005 called John Hugh Roberts , and another published in September called Mystical Writings of a Cymric Soul and one in October 2005 called The Galcerth of Halloween a story written by John Hugh Roberts at the turn of the century.

The Blog – Druidical Quest has been developed the last few years as we keep people informed of the latest developments.

Thanks for being interested. Any suggestions on sharing the material please let us know at azatlan@yahoo.com. 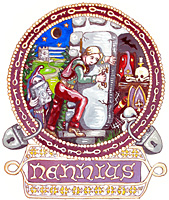